Burlingame, Calif., April 29, 2020 --- Inflammatix, a pioneering molecular diagnostics company delivering precision medicine at the point of care, announced the publication of a health economic model that shows the use of the company’s HostDxTM Sepsis test in patients suspected of acute respiratory tract infections (ARTI) in Emergency Departments is cost-effective versus standard-of-care. The study was published today in The Journal of Health Economics and Outcomes Research. The model informs hospital clinicians of the potential clinical and economic benefits of widespread adoption of the HostDx Sepsis test.

“Despite best intentions, current practices for evaluating patients suspected for acute respiratory tract infections are insufficient. Many patients without bacterial infections are overtreated with unnecessary antibiotics and extended hospital stays, while some patients with infections are missed, leading to dire clinical outcomes. This study shows that Inflammatix’s HostDx Sepsis test for the diagnosis of acute infections and sepsis could allow for improved patient outcomes and substantial health system savings” said Tim Sweeney, M.D., Ph.D., cofounder and chief executive officer of Inflammatix.

The publication described a cost impact model comparing the cost of standard of care versus the use of HostDx Sepsis in two hypothetical arms with 1000 patients presenting with symptoms of ARTI in the Emergency Department of an average US hospital. Compared to standard of care, on average, the HostDx Sepsis test arm showed a 0.80 day reduction in hospital ward length of stay (a 36.7% decrease), 1.49 reduction in days of antibiotic treatment (a 29.5% decrease), and a 1.67% decrease in 30-day mortality rate (a 13.64% decrease). Average cost savings were estimated at $1,974 per patient tested and nearly $2 million for the 1000-patient cohort (before considering the price of the HostDx Sepsis test, which has not yet been established).

For each scenario, standard of care and HostDx Sepsis, costs of treatment, hospitalizations, medications and outpatient visits were considered. HostDx Sepsis produces three scores for each patient: the likelihood of a bacterial infection; the likelihood of a viral infection; and risk stratification score. The HostDx Sepsis arm assumed the application of the test’s performance previously published in prospective clinical validation studies in the journals Science Translational Medicine1 and Nature Communications2,3. These included area under the receiver operating curve (AUROC) of 0.85 for the detection of a bacterial infection, 0.90 for the detection of a viral infection and 0.88 for predicting 30-day mortality (risk stratification).

“The ability to interrogate and understand how the immune system reacts to infection is more important than ever given the current COVID-19 pandemic. Whether it’s COVID-19, influenza, or bacterial infections, physicians need the ability to rapidly identify the presence, type, and severity of infection in a timely manner. Tests with robust performance characteristics that are generalizable are key to improving outcomes and reducing healthcare costs,” continued Sweeney.

Sepsis leads to 270,000 deaths4 in the US and $27B in Medicare costs5 annually. Inflammatix’s HostDx Sepsis test uses proprietary machine learning algorithms that incorporate the expression of multiple immune genes (host response) to identify the presence of bacterial or viral infections and to determine if a patient has or is likely to develop sepsis. Inflammatix’s simple-to-use, sample-to-answer HostDx system is designed to produce results at or near the point of care in 30 minutes or less. The company plans to advance its HostDx tests through commercial launch in Europe and submission to the United States Food and Drug Administration in 2021.

In January 2020, Inflammatix announced it had received $32 million in Series C financing. Prior to that, in November 2019, the company announced a cost-sharing contract with the Biomedical Advanced Research and Development Authority (BARDA), part of the U.S. Department of Health and Human Services’ Office of the Assistant Secretary for Preparedness and Response, to further develop its HostDx tests. The agreement is worth up to $72 million based on achieving certain milestones.*

Inflammatix is a molecular diagnostics company that is reimagining diagnostics by “reading” the patient’s immune system to deliver rapid results that improve patient care and reduce major public health burdens. The company’s initial focus is on acute infection and sepsis, where its HostDx™ tests combine proprietary biomarkers and advanced machine learning to help physicians quickly get the right treatments to the right patients. Each test will be developed to run on the company’s sample-to-answer isothermal instrument platform in under 30 minutes, enabling the power of precision medicine at the point of care. The Burlingame, Calif.-based company funders include Khosla Ventures, Northpond Ventures, Think.Health Ventures, Grey Sky Venture Partners, and the Stanford-StartX Fund. For more information, please visit www.inflammatix.com and follow the company on Twitter (@Inflammatix_Inc).

*This project has been funded in part with Federal funds from the Department of Health and Human Services; Office of the Assistant Secretary for Preparedness and Response; Biomedical Advanced Research and Development Authority, under Contract Nos. 75A50119C00034 and 75A50119C00044. 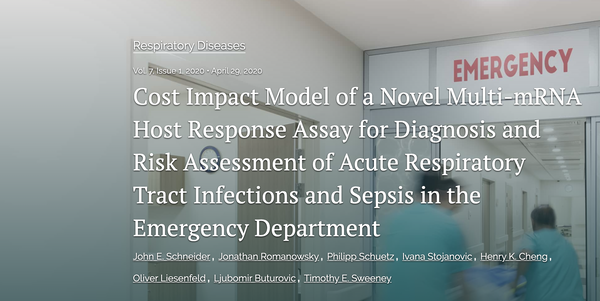